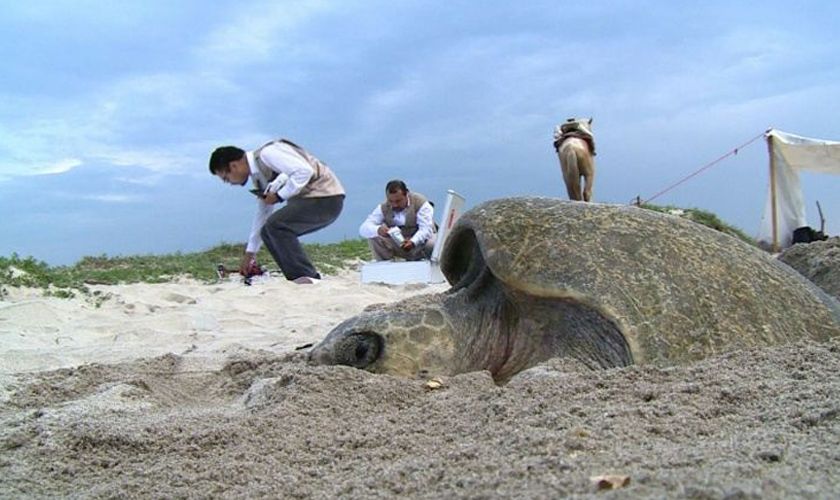 The drone, with six rotors that sound like a menacing hornet, has a GPS system and a camera to spot would-be “hueveros” (egg robbers) who hide between dunes and cacti along the Morro Ayuta beach in Oaxaca state.

Used for the first time this year, the surveillance aircraft “helps to map and identify the footpaths” made by thieves, said one of the 20 marines guarding the 18-kilometer (11-mile) stretch of beach near the town of San Pedro Huamelula.

The robbers storm the beach by the dozens on horseback, wielding machetes and sometimes guns, the marine said on condition of anonymity as he rested in a hammock.

Five years ago, he recalled, hundreds of hueveros arrived on the beach with guns blazing to steal the eggs of the endangered sea creatures.

“It looked like Troy,” he said, referring to the Trojan war.

While troops have been deployed in the past, the authorities are using for the first time two drones that were donated by Mexico’s College of Environmental Engineers.

Poachers risk up to nine years in prison and a nearly $12,000 fine if caught grabbing eggs out of the sand nests.

Since July, one person has been detained and around 14,000 eggs have been seized by the authorities in Morro Ayuta and the neighboring beach of Escobilla.

In one night, some 70,000 turtles come ashore to lay eggs on those two beaches, according to the federal prosecutor’s office for environmental protection (Profepa).

Despite the drones, soldiers and prison threats, thieves find a way to snatch eggs under the cover of darkness as the aircraft only work during daylight, said Nereo Garcia, the regional Profepa official.

The poachers are the first link in a clandestine market that ends with eggs sold in markets of the nearby village of Juchitan and as far away as Mexico City’s crime-ridden Tepito neighborhood.

On restaurant menus, a half-dozen cooked eggs are priced at 60 pesos.

An austere restaurant in Juchitan offers a “super-vitamin-added seafood soup” — a spicy broth with herbs, snail, clams and two turtle eggs for 100 pesos.

“It sells pretty well. Tourists order it out of curiosity,” said a waitress, whose restaurant serves boiled eggs on a bed of lettuce with lime.

Every year, six of the seven species of sea turtles in the world nest on the coasts of Mexico between July and March. Some arrive all the way from Japan.

Morro Ayuta mostly sees olive ridley sea turtles that come by the tens of thousands, invading the beach to dig their nests and lay on average 100 eggs each.

In the 2014 season, more than 1.1 million olive ridley sea turtles nested in Mexico, up from just under one million a year earlier, according to official figures.

OTHER THREATS LURK
Despite the improvement, Mexican authorities are keeping their guard up as humans are not the only threat.

Birds and wild dogs feed on the eggs, and only 35 percent hatch after the 45-day incubation period.

Once the baby turtles are out, they must dodge predators as they scurry toward the ocean. Only one out of 1,000 reach adulthood, according to experts.

Eduardo Najera, director of the non-governmental organization Costasalvaje (Wild Coast), fears that investors will spot the untouched beachfront and seek to build on the beach.

“They’ll want to build 40-story hotels, a golf course, an airport, and then the miracle is over,” said Najera, who is lobbying to have the beach declared a conservation area.