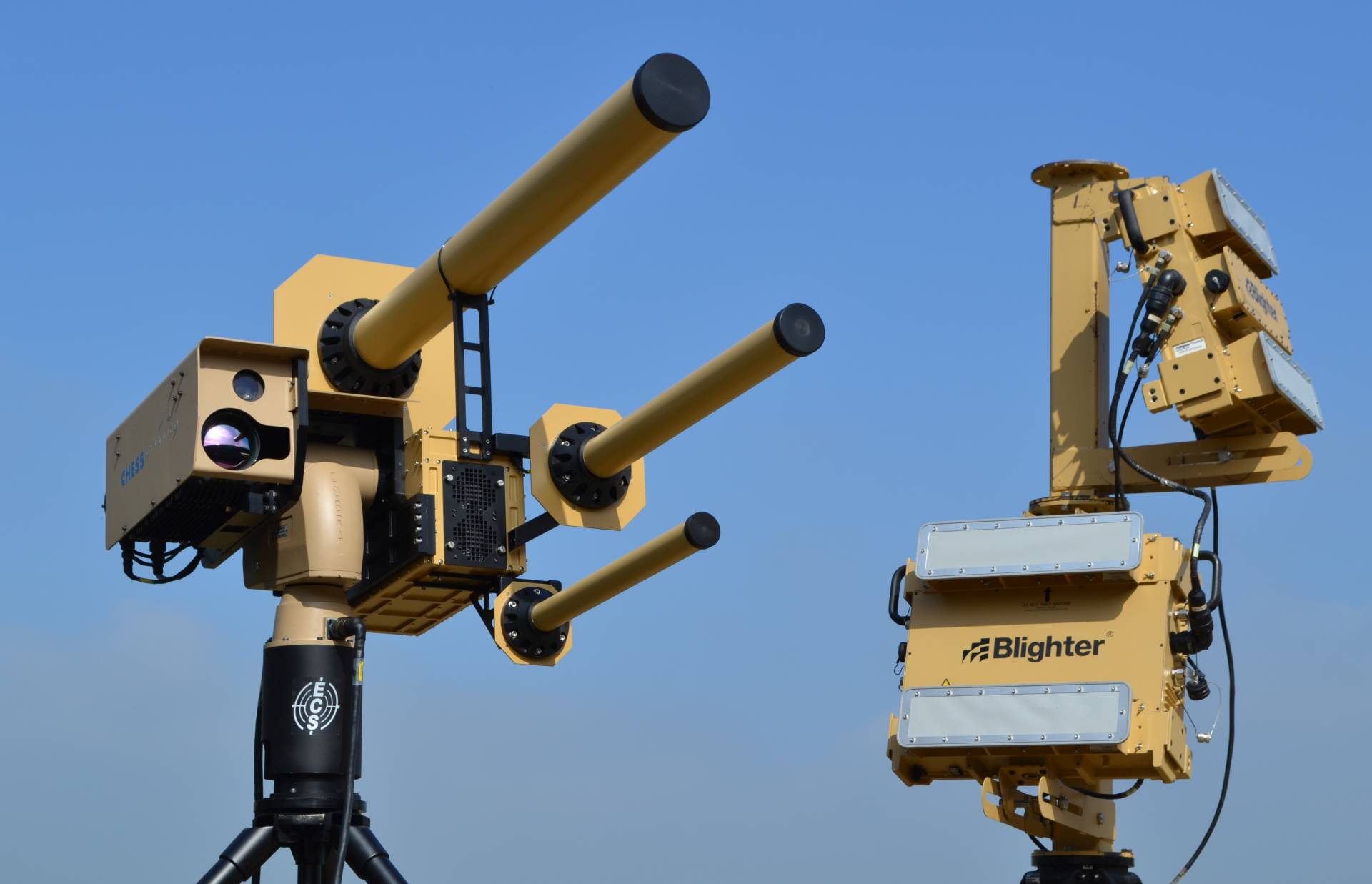 The Anti-UAV Defence System (AUDS) integrates the Blighter A400 Series Ku band electronic scanning air security radar, Chess Dynamics’ stabilised electro-optic director, infrared and daylight cameras and target tracking software, and a directional radio frequency (RF) inhibitor/jammer system from Enterprise Control Systems to detect, track, classify, disrupt and neutralise UAVs at ranges of up to 8km. The AUDS system is even effective against so-called Group 1 micro UAVs at ranges of up to 2km and Group 1 mini UAVs at ranges of several kms.

Mark Radford, CEO, Blighter Surveillance Systems, said: “We formed the all-British AUDS team in 2014 as we were each acutely aware of the urgent operational requirement from our customers for an effective and affordable anti-UAV system. Working in partnership, we have developed some clever technology (patents are pending) that integrates the different sensors, effector and electro-mechanical positioning systems to disrupt and bring down any malicious drone in a phased and controlled manner.” According to the AUDS team, the technology has been extensively tested in South Korea along the 250km demilitarised zone (DMZ), where Blighter radars have been deployed for some years. In March 2015, the AUDS team took part in multi-supplier French Government trials in Captieux, France, where its counter UAV system proved highly successful in detecting and neutralising a variety of fixed and rotary wing micro, compact and standard UAVs. And last week, the system also performed well in UK Government sponsored counter UAV trials (known as Bristow 15) in West Freugh, Scotland.

The AUDS system is designed for counter UAV operations in remote border sites or urban areas. It can be operated from fixed locations and from mobile platforms. Key features and benefits include:

Colin Bullock, CEO, Enterprise Control Systems, said: “We believe that with the combination of our three systems – best-in-class expertise in radar detection, camera & video tracking and RF jamming & data communications – we have a world-beating product that competes even with systems based around expensive military 3-D air security radars. And, AUDS is available at commercial (COTS) prices right now.”

With incidents of UAV and drone related security breaches occurring on an almost daily basis, the AUDS system is able to address the heightened concern about UAVs within military, government, critical infrastructure and commercial security organizations. While UAVs have many positive applications, it’s expected that they’ll be used increasingly for malicious purposes – they can carry cameras, weapons, toxic chemicals and explosives – and be used increasingly for terrorism, espionage and smuggling purposes.

Graham Beall, managing director, Chess Dynamics, said: “This is truly an exciting collaboration – three British high-tech companies with different technologies and expertise working together to address the global problem of UAV detection. Our new invention is a complete smart sensor and effector package that can automatically detect, track, classify and when required neutralise the potential impact of malicious UAVs with a measured response. These three fully integrated technologies give AUDS a truly optimised Sensor Effector Mix.”

The Anti-UAV Defence System (AUDS) has been designed, developed and manufactured in the UK using British technology and is available to order now with shipments beginning in August 2015. For more information about AUDS, please contact any of the partner companies below: