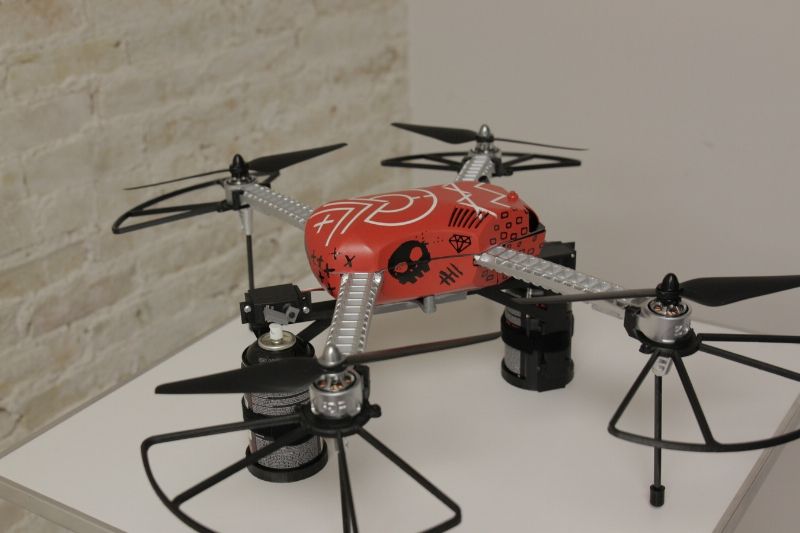 Chaotic Moon Studios, a creative technology studio in Austin, TX has apparently ruined the fun for themselves at the 2015 South By Southwest Interactive Festival. The notorious design studio made international headlines last year with its “Taser Drone” that shocked an intern with 80,000 volts of electricity.

Their newest drone, Tyrone, which can tag a wall with spray paint, accost onlookers with silly string or deter attackers with a three foot flame, was originally supposed to debut during the South by Southwest Interactive Festival.

“Drone Tyrone is about pushing the utility aspects of drone and beacon technology,” said Chaotic Moon Studios’ Ben Lamm. “We wanted to prove that you can use these vehicles for more than just aerial photography.”

However, this year Austin Chief of Police, Art Acevedo, is taking no chances with public safety and issued a complete ban on flying their drones over crowds. If they fail to follow the rules, Chaotic Moon Studios could have Drone Tyrone confiscated, suffer a fine, or even go to jail.

“Believe me, in the state of Texas folks don’t like drones, so if you operate one, we will get a call,” said Acevedo in an interview with KEYE TV. He worries the drone could pull officers away from bigger concerns. “When people see drones, guess what that generates?” asked Acevedo. “911 calls. And that generates unnecessary work for us.”

“For Chaotic Moon Studios, it’s always about pushing technological boundaries,” said Lamm. “We got a lot of flak last year for the taser drone, but we did that to start a real dialogue about citizen drone surveillance and submission. The technology was outpacing the legislation, and that event was a huge catalyst for public awareness and education.”

Even though Drone Tyrone might be grounded for SXSW, Chaotic Moon still has plenty of other projects to debut during the festival. Chaotic Moon is launching FitCoin, a fitness band crossed with BitCoin that actually pays you to work out. They are also revolutionizing indoor lighting with their LED and fiber optic system called Solaura, and they are partnering with global architecture firm, Gensler, on a 30-ft tall interactive pneumatic tree called ORCHARD.

“We’ve got a ton of awesome stuff going on at South by Southwest,” said Lamm. “We’ll figure out how to debut TYRONE, one way or another. We didn’t get where we are by asking for permission.”

Indian police to use pepper-spraying drones on unruly protesters